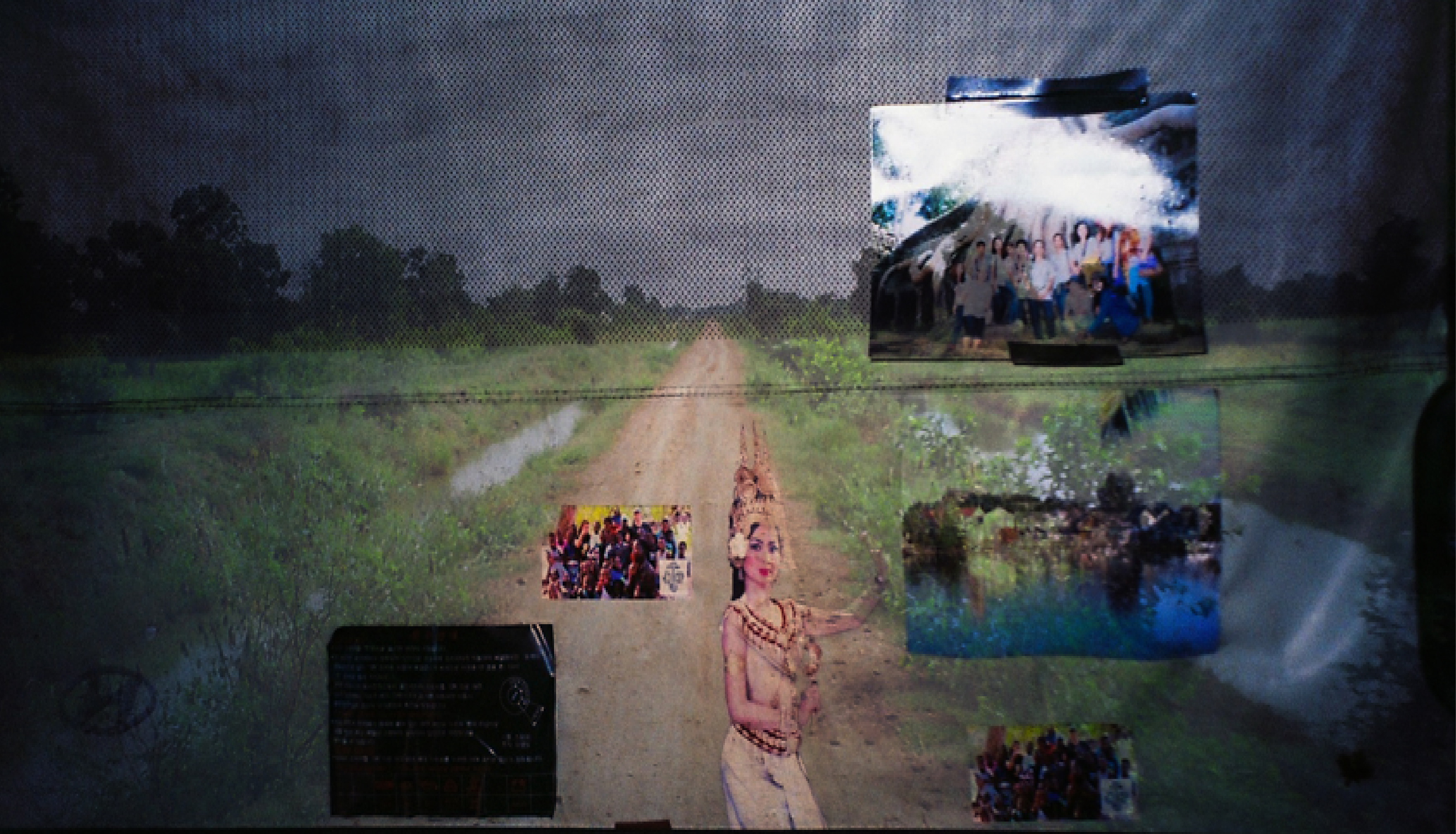 FIELDS brings artists and curators to Cambodia to engage contemporary ritual practice. The 20-day nomadic itinerary is a proposal that traverses space, temporality, and culture through a politics of memory, inheritance, and tradition by performing a cartography that informs and alters its references. The nation’s agrarian landscape, the fieldwork of anthropologists and aid workers, Buddhist notions of merit-fields, the psycho-geographical landscape referred to as the Killing Fields, and the history of art practices in the expanded field all serve as starting points.

A story does not have a beginning until one has been assigned to it. FIELDS’ itinerary begins by merging the sacred and the profane, facilitating the virtual effect on the actual, pedagogy and action - praxis. We begin in Cambodia’s capital Phnom Penh with a series of establishing sakasalas, or workshops: on language and epigraphy at the Buddhist Institute, on colonial audiovisual archives at Bophana Resource Center, and an analog political history mapping exercise at a karaoke club. On the road to Siem Reap we wander the deserted Udong, Cambodia’s pre-colonial royal capital. In Siem Reap, we participate in the 3-day Conference on Special Topics in Khmer Studies Don’t Abandon the Indirect Road: Divergent Approaches to Cambodian Visual Cultures. Exploration in and around Angkor includes visits with guardians of the main repository of categorized stone remnants; archeologists of a recently discovered ancient bronze-casting artisan workshop; scholars of Buddhist temple narratives and iconography; itinerant painters responsible for the temple’s west wall depictions of hell; and practioners of sak yant, or yantra tatooing. We overnight with the floating village community of Kompong Pluk on the Tonle Sap Lake for a night of films by Charlie Chaplin, the archetype for Cambodian comedians. We drive to the highland regions of Mondulkiri, home to the indigenous Bunong where we will be guided in daily works and ritual ceremony for four days. On the road back to Phnom Penh, we stop in Memot to walk the hills of Iron Age circular earthworks. Our return to Phnom Penh traces a series of urban legends including architect Vann Molyvann’s Independence-era iconic works; the award winning fiction writer behind the Khmer translations of Beyonce; and the Documentation Center of Cambodia whose mantra is “searching for the truth”. Our ending is not an ending.

The residency’s peripatetic and multidisciplinary nature is intentionally associative with tensions around modes of colonial exploration, exoticism, and contemporary tourism. FIELDS operates from the space of these tensions to reconfigure ideas of knowledge exchange and the stratified roles that inform this kind of cultural exchange. Our map of meetings and site-visits will reconstitute practices of fieldwork - not the study of the other but a collaborative pedagogy rooted in mutualism.  Owned by neither guest nor host, the FIELDS proposal acts on the intrapersonal and the transformative. A number of individual and collective projects will result from FIELDS, including a publication planned for 2014.

ST PAUL St Gallery is a non-collecting gallery based within the School of Art + Design at AUT University, Auckland. ST PAUL St Gallery embraces one of the primary instructions for universities in the New Zealand Education Act (1984), that they "accept a role as critic and conscience of society."

SA SA BASSAC is a gallery, reading room and resource center dedicated to curating, mediating and archiving contemporary visual culture and projects in and from Cambodia.